Gas prices skyrocket...and so does speculation. 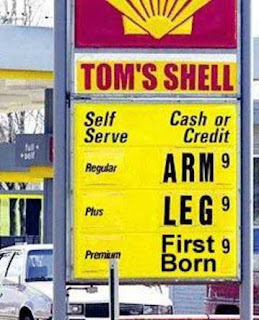 Have you noticed the big changes at the pump?  Or a decrease in your discretionary income because the cost for a gallon of gasoline is going up?  Some speculators say that we can expect to see $5 - $6/gallon this summer given that it is "driving season" and also hurricane season.  Some say prices are going up due to the Feds are pumping printing billions of dollars to prop up our economy to weaken the dollar and drive prices up.  Or maybe it's because of a war within a small country in Africa, that supplies less than 2% of the world's oil supply?  While these situations might affect the price of oil somewhat - I don't believe that we will see anything close to $5/gallon for gas...or at least not for long...and here are my reasons why:

Economics 101 tells us that whenever supply outpaces demand, there will be a significant drop in prices to reflect the high supply and low demand.  Because we have a lot of oil supply, the current price or any future speculative price of $5/gallon must quickly decrease.  In 2008, people became frantic when gas hit $4/gallon and started trading their SUVs and trucks in for very expensive hybrids and the Toyota Prius.  Obviously, there wasn't a "supply" issue then, and there isn't one now.  How quickly we forget!  For those of you who remember - "they" predicted the same $5/gallon for gas then in 2008, just like they're doing now.  In 2009, average cost for a gallon of gas fell from $4/gallon to just $1.85/gallon.

2.  Unemployment is still too high and the US economy is still weak

The US economy is the largest in the world and consumes the most oil in the world.  In other words, we're the oil producer's #1 customer.  If our economy is in a recession, which means we're not buying as much oil, then oil producers are not happy.  They want our economy strong and unemployment low.  When the US is strong and people are driving to work everyday - the more gas/oil we consume.  Typically, when oil reaches $130/barrel, the US economy is heading for a recession because things become too expensive for us at this level.  The cost of food, utilities, clothing, and everything else skyrockets as gas prices escalates...causing our economy to tumble.  As of this writing - oil prices are currently at $112/barrel.

Financial speculation tends to create fear and/or greed (or "noise") in the markets and usually gets the masses frantic enough to do stupid things in reaction to this fear and greed.  For example, consider in 2005-2007 when people were jumping to get into real estate by any means necessary (even if they had no money) because they thought "the prices are just going to go higher".  Only to be stuck in foreclosure, bankruptcy, or constantly fighting adjustable rates in 2008.  Remember how quick financing was available back then?  But today, it's very difficult to get financing for anything in real estate.

The same speculation is going on within the oil markets to some degree...where you have investors (institutional and individual) running to invest in oil at these high prices because "it's only going to go higher".  Timing is everything, folks.  Buying commodities or stocks just because the price is going up is ridiculous.  Warren Buffet said it best - "Buy when people are cautious...sell when people are greedy."

These are my reasons as to why the current high gas prices aren't sustainable because of the ample supply, the current unemployment rate, and just plain old speculation in the markets. So don't get too panicky because of the current prices just yet.  Do what you can to survive....carpool, telecommute, walk, ride a bike, etc.  Prices will soon turn for the better.