As the holiday season approaches, consumers are temporarily spending money to buy the latest electronic gadgets, clothes, etc.  But as we went out after Thanksgiving to take advantage of the excellent prices on several items, our US Treasury borrowed $24 Billion just on Black Friday alone which puts our debt levels at the highest peak in history.  I suppose it was their day to take advantage of the US taxpayer...yet again.

The debt levels continue to steadily increase in our country as we watch the National Debt Clock tick away as if we're watching a bomb close to detonating.  We know eventually something has to happen - there's no way our national debt can simply keep rising into infinity.  There's no way that other countries will simply continue to loan us money without some application of austerity measure similar to what's being implemented in the EU.

The aftershocks from such a calamitous event would be disastrous at home and for the global economy.  The economic duress we're under today will probably become even worse and cause more American unrest than what we're feeling today....  unless there are strong measures in place to prevent our country from further decline...which Congress has failed to do repeatedly.  As college tuition default rates climb, bankruptcies increase, our savings rate and the home foreclosure rate continue to be a nuisance on our economy - an investor has no choice but to seek out global opportunities in search of alpha (profitable investments).  Instead of buying that next gen- Ipad or LED flat screen TV, use that discretionary income to invest in real assets.

And most of the global opportunities for real assets will be in real estate, agriculture, land, gold, silver, and other commodities to name a few.  If the economy does get better, there will be an increased demand for the items mentioned above and the owners (or investors) of these items will stand to make a generous profit.  However, if the economy continues to get worse and our dollar keeps its trend of decline, then these commodities will become even more expensive as the government continues to implement its Quantitative Easing efforts to devalue the currency (or in their words, continue to pursue policies that target inflation).  [Has anyone noticed how consecutively wrong Bernanke has been in his statements to Congress about the state of the economy?  Perhaps it's just me....I digress...]

But, for sake of argument, let's say I'm completely wrong about everything that I've ever stated on my website, and American currency rises from the ashes like a Phoenix....  if this is the case, then you have nothing to lose or worry about except increased taxes, less entitlements, and global competition.

However, if I'm right, then what's the harm in taking out an insurance plan for your wealth's sake?  And give yourself peace of mind by protecting some of your wealth and converting some of your dollars for real assets such as, real estate, agriculture, land, gold, silver, and others?  Instead of TVs, Ipads, etc.?  Start investing little by little every month and you'll soon realize the benefits.  Worse case scenario - you will have diversified your money into investments that will pay for themselves in the future.  Best case scenario - you will have made an exceptional profit as the dollar declines as our country's role in the global economy is decided. 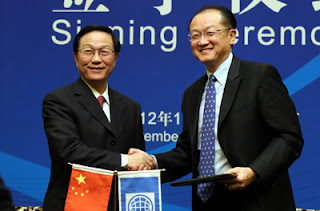 Interesting link above from the Wall St Journal today on how the US Treasury falls short on calling China a currency manipulator!  Well now...we can't accuse our country's second largest lender (we're the first) of being a nasty currency manipulator now can we??  That would make relations bad...lol

Can't bite the hand that feeds you....

Comments from Christine Lagarde of the IMF

Very interesting presentation from Christine Lagarde of the IMF - in the link above she comments on the role of Asia in the IMF and the global economy.  Although the IMF lowered it's outlook for the global economy in 2013 - she mentions things could get even worse if cooperation between and within countries, and the "fiscal cliff" in America is not avoided.  The woes of the West must be resolved and "all sides must come together" before we could realize a return to growth and low unemployment.

An interesting read for those who are interested in the ASEAN Economic Community and its involvement/future in the global economy.

The presidential election is coming up this Tuesday and the world is fixed on the results of the election.  Whether it be Obama/Biden or Romney/Ryan doesn't matter...because there's a lot of work to be done and no one man will be able to change the economic outlook for the US or the global economy.  The International Monetary Fund (IMF) just released its assessment of the global economy and identified two critical issues that could effect the recovery of the global economy.  The euro-zone crisis and the "fiscal cliff" threat faced by Europe and United States, respectively.

Europe needs to contain its money woes and increase stability for its currency.  The country is experiencing "capital flight" where the money is leaving the country in search of a safe haven.  Normally, the United States would be a sure safe haven but we also are experiencing our own woes in the form of pending tax increases, raising the debt ceiling (for about the 11th time in 8yrs), and automatic spending cuts.  The United States has raised its debt ceiling for over 140 times since 1940 - Office of Management and Budget.

The World Economic Outlook report can be found here: http://www.imf.org/external/pubs/ft/weo/2012/02/index.htm

The IMF expects advanced economies to grow at least 2% - which the US has done, but unfortunately most of America's growth is due to government spending on mostly military goods/services.  Which is somewhat interesting since the spending has been done right before an election year.  Nevertheless, unemployment remains high and companies continue to hoard cash due to uncertainty running amok in the marketplace.

A Solution for You:
There is a way for you to take advantage of this situation for your own benefit.  Invest in commodities such as oil and agriculture products.  Investing in commodities is how you can make some money no matter who's elected or if the economy turns up for the better or turns down for the worse.

If the economy gets worse, central banks will print even more money trying to stabilize the global economy...the result of their printing will devalue the currency and cause prices to increase.  When prices increase your investments increase.  If the economy gets better, then the increase in demand for commodities will increase as people will have more money to spend and corporations will need to use more resources for expansion.