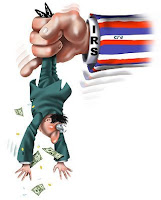 
My comment:
Looks like the government has found another way to rust out the wheels of commerce and entrepreneurship. Seriously, does this new mandate allow for increased productivity and lower unemployment? Or does this mandate serve to further complicate business and increase the size of government? One might say it's an economic "death by a thousand cuts"...

Lever UP! Applying the Debt/Equity ratio to the US Government

This is a read for financial fanatics like me…

The term “Lever UP” is a term used by mostly investment bankers/politicians when they’re considering using leverage (or in other words – debt) to expand, increase profits, or to cover an entity’s operations. Using leverage requires great discipline of the individual, corporation, or government entity that chooses to borrow money for whatever purpose. Unfortunately, it’s easy for a person or an organization to easily have bad judgment in determining how much leverage he/she can manage…and I wonder if the United States is misjudging its ability to contain its debt woes.

“US firms are at or near the forefront in technological advances, especially in computers and in medical, aerospace, and military equipment; their advantage has narrowed since the end of World War II. The onrush of technology largely explains the gradual development of a "two-tier labor market" in which those at the bottom lack the education and the professional/technical skills of those at the top and, more and more, fail to get comparable pay raises, health insurance coverage, and other benefits. Since 1975, practically all the gains in household income have gone to the top 20% of households.” “Long-term problems include inadequate investment in economic infrastructure, rapidly rising medical and pension costs of an aging population, sizable trade and budget deficits, and stagnation of family income in the lower economic groups.”

Take, for instance, an over-leveraged corporation that has an unsustainable amount of debt and in order for it to maintain just the interest payments on the debt it has incurred – it must raise its prices and reduce employee benefits (expenses) by cutting its healthcare benefits, reduce salaries, and engage in massive layoffs.

Does this sound familiar? Does it remind you of our government? Where we are embarking on trillions of dollars in debt!? From a governmental standpoint, where a government is over-leveraged, it will (or it should) raise its taxes (i.e., Government will be dramatically raising taxes beginning 2011) and cut healthcare entitlements such as Medicare and Medicaid (i.e., Both of these programs are severely underfunded), it will cut Social Security payouts (i.e., Trustees estimate this will be bankrupt by 2037), and have temporary high unemployment (i.e., Currently the unemployment rate is at 9.3%).

Let’s consider the United States’ debt/equity ratio (I replaced the word company with [government] for purpose of this article):

A high debt ratio is explained by Investopedia.com

A high debt/equity ratio generally means that a [government] has been aggressive in financing its growth with debt. This can result in volatile earnings as a result of the additional interest expense.

If a lot of debt is used to finance increased operations (high debt to equity), the [government] could potentially generate more earnings than it would have without this outside financing. If this were to increase earnings by a greater amount than the debt cost (interest), then the shareholders benefit as more earnings are being spread among the same amount of shareholders. However, the cost of this debt financing may outweigh the return that the [government] generates on the debt through investment and business activities and become too much for the [government] to handle. This can lead to bankruptcy, which would leave shareholders with nothing.

What do we do?

It seems not to matter what your political party may be, because Democrats and Republicans alike seem to increase the debt of this country. Everyone is out for self-interest before they consider other’s interests. So we have to be financially responsible for ourselves – no matter what’s going on in Washington.

So, protect your self-interests….my advice is the same as it always have been – I would advise people to get out of debt, invest a portion of your wealth in commodities such as silver and gold, oil, real estate, etc. Establishing a retirement plan just with paper dollars is a huge risk – so those of us who are considering retiring with a 401K and/or Social Security might be putting too much risk into paper dollars and on the capability of his/her government. It’s time to consider some alternative assets.

Email ThisBlogThis!Share to TwitterShare to FacebookShare to Pinterest
3 comments:

Where the Wealthy (and Scared) Invest: U.S. Trust Advice - TIME

Where the Wealthy (and Scared) Invest: U.S. Trust Advice - TIME:

It's your life. BE FREE.
http://www.befreecompact.com/

China Says It Won't Use U.S. Debt as Threat - WSJ.com

China Says It Won't Use U.S. Debt as Threat - WSJ.com:

The fact that this even needed to be said should be cause for alarm...

It's your life. BE FREE

Unfortunately, this really isn't news...in fact this is expected. It's eventually expected for all nations. It's a shame that a nation's citizens can't foresee or don't get upset enough over such an obvious heist. For instance, let's say a person put their money in a savings account at a bank for 45 years, then at the end of those 45 years they decide to go to the bank and withdraw some money. But the bank says "unfortunately we don't have your money today - you're going to have to wait another 5 years before you can receive it." The person is confused and asks "well...why do I have to wait for my money? You guaranteed that my money was safe and it would be available to me when I was ready. Where is it?"

The bank replies, "we spent your money to expand our banking and financial services to new states - so we could serve more people. But - don't worry, we've replaced your cash with IOU's."

If this was a true story, I bet a lot of people would be livid to find out that their money was missing....oh wait - this IS a true story. Only the bank is the government and the money represents your social security that you've been required to pay through involuntary taxes.

How did this happen? How can we prepare to avoid working until we're 70? 80? Or will we ever be allowed to retire? Will we be able to afford it?