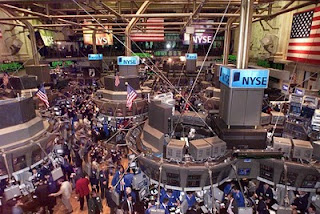 Just a quick thought of mine....

I've recently read a book written by Milton Friedman and Anna Schwartz titled "The Great Contraction: 1929 - 1933", in this book it details about the events leading up to the Great Depression and how the government failed to identify "bubbles" in the economy before they popped - and also how the government failed to properly react in order to get the economy back on track.  Nevertheless, after the Great Depression, the government finally implemented a series of laws to prevent this from ever happening again...but over time, eventually lobbyists were able to get these laws repealed (such as the Glass-Steagall act, the Uptick Rule, etc.) to lift the "restraints" of capitalism so that a free market could be just that...free.

But, as we learned from the Great Depression, when the markets are left without some form of control in place (even a minute form of control) - greed and fraud will most certainly erect itself at the expense and demise of others.  For example, ever heard of the Bank of United States?  It was one of the largest banks in the country - until it went belly up during the past Great Depression.  But I bet you've heard of Lehman Brothers...?  How about Bear Sterns?  These banks went belly up with the current recession, along with people's investments, retirement fund, and jobs were lost.

So kudos goes to the Obama administration (assisted by Paul Volcker...i.e., the Volcker Rule) for taking the steps it feels necessary to reinstate the modest laws that were already in place after the Great Depression to keep the system from going too far astray where American families lost their retirement, homes, and their future due to a few people or companies that have succumbed to greed.  As I told a friend of mine today - a strong economy is not completely about what laws matter to a Democrat, Independent, or Republican...it's ultimately about lessons learned from history and modern economics - and how best we can use our resources to inspire businesses and entrepreneurs to reach new heights and profits (legitimately), and also support the highest confidence and faith within our market economy.

Here's what should you do to help your community, country, and secure your future....

Obama suggests value-added tax may be an option - Yahoo! News

Obama suggests value-added tax may be an option

via Obama suggests value-added tax may be an option - Yahoo! News.

Interesting topic - with the current deficits growing, the Obama administration needs to find away to deal with cutting debts and also not harming America's recovery.  Time to take your medicine America...we've come a long way baby, but now it must be time to pay up.

How to manage debt...a complex concept?

Managing debt may not be a complex concept within personal finance – but, interestingly enough, managing debt seems to be the most complex subject for individuals & families today (Even the government could use a lesson…but that’s another story!) Many hard working Americans have huge amounts of debt in the form of a mortgage, student loans, credit cards, etc.  But why is this?  The answer can be derived from 3 sources:

The lack of financial education in our schools creates a society that doesn’t know much about investing, retirement, and the benefits of saving.  This is why most Americans leave all of the “hard work” to other “experts” like financial advisors and bankers that may or may not have their best interests in mind.

The devaluation of the dollar has forced many people to struggle to afford the basic necessities of life.  Gas prices, cars, houses, clothes, and food prices are steadily increasing – and it is becoming more common for Americans to compete for labor in addition to our full-time jobs…such as part-time jobs or weekend work to keep up with the cost of living.

Everyone can see the lifestyles of the rich and famous – and wants to have their own “American dream”.  But unfortunately many of us try to have this lifestyle even though we can’t afford it – which is why during the current economic recession we can see “who’s been swimming naked”.  Meaning, we can see those who file for bankruptcy, foreclosure, or have their creditor repossess the leased assets for lack of payment.

How do we fix the problem?  Start with the man (or woman) in the mirror – learn your credit score and history from the 3 credit bureaus Experian, Transunion, and Equifax.  Live below your means and reduce as much debt as possible so that you’re able to save 8-12 months of your annual income for an emergency fund.  Learn how to invest and increase your cash flow.  Reduce student loans by applying for grants and scholarships – if there is still a need for loans to cover the costs of tuition…then consider starting the first 2 years at a community college if possible, go to a University within your home state, and maybe work while at college.

Interesting article for those looking to return to school now or in the future.  Click on link above... my comments are below:

This is excellent for the private lenders – whose money will be backed by the “full faith and credit of the US government” – because loans from the government are not forgiven.  Which means a student cannot file for bankruptcy and have his student loan debt wiped clean.

As many of you know or may not know – I write to a few blogs all over the web.  One blog (Examiner.com) requested that I post my articles to their website…and in return they will pay me and also give me corporate discounts at major retailers nationwide.  Well, today I’m allowed to share these discounts with family and friends.  So I figure, why not give these perks back to my readers?!  Everyone likes to save a buck...so here is a summary of what you could save below:

Examiner.com is excited to offer a valuable new benefit to active Correspondents. Examiner Perks is a Correspondent Discount Program with discounts at over 28,000 retailers nationwide to help you reduce your personal expenses. With Examiner Perks, you will save on everything from groceries, movie tickets, clothing and accessories to electronics, vacations and personal care items.

Savings negotiated this week for you to celebrate the launch:

* Please send me your first and last name, along with your email address and you too can begin saving money!