Funny Money....Just two thoughts of mine... 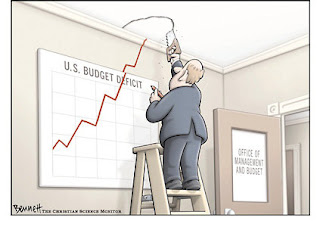 Is it me or isn't it just strange that on February 16, 2007 the Dow Jones read 12,767.57 and the unemployment rate was 4.6% ?  Yet, today, February 17, 2012 - the Dow Jones reads 12,949.87 and the unemployment rate is 8.3%.....quite a puzzle huh?  How can we possibly have a Dow Jones this high when the unemployment rate is so high??  Compared to 5 years ago?  This is evidence of how much money has been "created" into our economy to keep us afloat via bailouts, stimulus, tax cuts, and some expansions of government.  But one must wonder, is this economy really sustainable under the creative financing measures called "quantitative easing"?  Or is this just another house of cards that Ben Bernanke is shuffling in the same manner that Alan Greenspan did?  And it's an election year - here in the USA and in several other countries around the world....the leaders are going to put on their best show of smoke and mirrors to give us a positive illusion of an economic upturn.  But I think after the elections have been decided - we might be in for a wake up call.

My second thought:
Everyone is talking about the Mortgage Meltdown

and the harm it's doing to our economy.  But not many are focusing in on another pertinent issue - student loans.  The average student now graduates with approximately $25K in loans that has to be repaid and is not able to be relieved through bankruptcy.  However, with the unemployment rate being as high as it is - several students are underemployed or simply unemployed because they can't find the jobs that they studied for 4-6 years.  Companies simply aren't hiring like they used to.  America has more debt in the form of student loans than we do in credit cards!  This is a bubble waiting to explode.  What I do not understand is how the government is proposing to offer Student Loan Reform